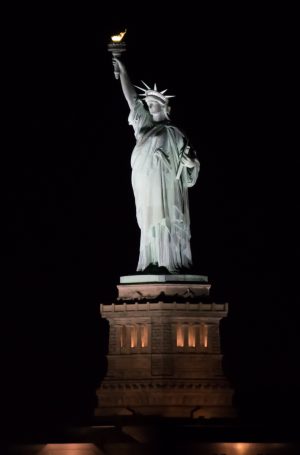 Still one of the strongest symbols for liberty and freedom, the ‘Statue of Liberty’ has a rough time at the moment to be seen as ‘Liberty Enlightening the World’, her official name. Then again, enlightenment can come in many forms and maybe the current situation of a proud democracy[1] being lead by a reality TV “star” showing some fascist tendencies with his authoritarian style and in naming a good chunk of the press the enemy of the American people, is some form of enlightenment. It shows how quickly the tides can turn if people don’t pay attention.

Day after day I take a look at Donald Trump’s tweets, and day after day it ends in disappointment that Trump really managed to get elected. Today he tweeted

“How low has President Obama gone to tapp my phones during the very sacred election process. This is Nixon/Watergate. Bad (or sick) guy!” (Link)

and I wonder if he really believes that to be the case, or if it was just another of the many distractions thrown at the press to make them focus on as many things as possible so that real issues get overlooked and underreported. However, it can’t be bothering him too much, just a little over an hour later he seemed to be over it and tweeted

“Arnold Schwarzenegger isn’t voluntarily leaving the Apprentice, he was fired by his bad (pathetic) ratings, not by me. Sad end to great show”. (Link)

I’m sure one can argue a lot about what would be deemed presidential behaviour and what wouldn’t be. But I’m also sure that petty bickering about a TV show is not what people expect from a President.

And that is just the disappointment from reading his tweets, his policy and cabinet decisions are even worse, and the often blatant science-denial of his administration is short-sighted and dangerous.

I headlined this article “A Matter of Time”, and I meant that in regard to Trump’s impeachment. I don’t believe that he is going to make it through a full term. He will resign to avoid his impeachment. Looking at the way he acts as President, the day will come when he’ll be crossing a line. Having a cabinet with so many conflicts of interest, and a staff willing to leak basically everything happening at the White House surely won’t help him in that matter.

Until then he will continue to dismantle a lot of the things America once stood for. Destroying progress made on many social issues over the last decades. Normalizing to think and talk about issues and people in ways many have believed to be a thing of the past. But empowered by the President’s and his administration’s example some of those old-fashioned beliefs and ideas are now acted upon, as they are still harboured by more people than most of us would have expected, sometimes hidden on purpose, sometimes latent, without people even realizing.

The ‘Liberty Enlightening the World’ does so in good as in bad times. Maybe in times like these the enlightenment she has to offer is even more important. Just because backwards ideologies are not immediately apparent and seem to be a thing of the past, people should never stop to be vigilant, because those ideologies can return quickly. Let us hope she once more manages to enlighten the people and they fight back for liberty and freedom, two of the things America is losing right in front of our eyes.

1. ^ And just in case you want to nitpick, the US is indeed a democracy, read this short piece by Lawrence Lessig or indulge yourself in the Wikipedia entry talking about democracy and its different forms

Image credit: The Statue of Liberty at night, seen from the Staten Island Ferry by Wikipedia-User 0x010C – CC BY-SA 4.0